Laparoscopic liver resection (LLR) is well established as a treatment method for liver disease. This method has been increasingly adopted due to a number of associated benefits, including reduced intraoperative bleeding, lesser pain and subsequently lower analgesic requirement, shorter postoperative hospital stays, and improved cosmetic outcomes (1-3). Moreover, the indications for LLR have been increasing, with major LLR becoming a standard procedure in specialized institutions (4-6). On the other hand, living donor liver transplantation (LDLT) has gained broad acceptance as a therapeutic modality. The most important principle of LDLT is both, to make sure of minimal risk and to provide rapid recovery to the healthy donor. These principles can also be achieved with pure laparoscopic donor hepatectomy (PLDH), which reduces the physical burden on patients who undergo donor hepatectomy. Nevertheless, since this technique is still in development, PLDH remains controversial in terms of its safety and efficacy (7,8). This study aimed to determine whether the Glissonian pedicle approach is an appropriate method for PLDH in terms of safety and efficacy.

We retrospectively reviewed a database of patients undergone LDLT at our institution. The study was approved by institutional ethics board (No: MH2018-555), and informed consent was taken from all the patients.

Donors were placed in the semi-left lateral decubitus position with the reverse Trendelenburg position. The anesthesiologist maintained a low tidal volume, low airway pressure, and low central venous pressure, all of which contributes to reducing blood loss (9). The operator stood on the patient’s right side, while the operative assistant and laparoscopist stood on the left side of the patient. Five trocars were inserted, and CO2 pneumoperitoneum was maintained at 10 mmHg (Figure 1). 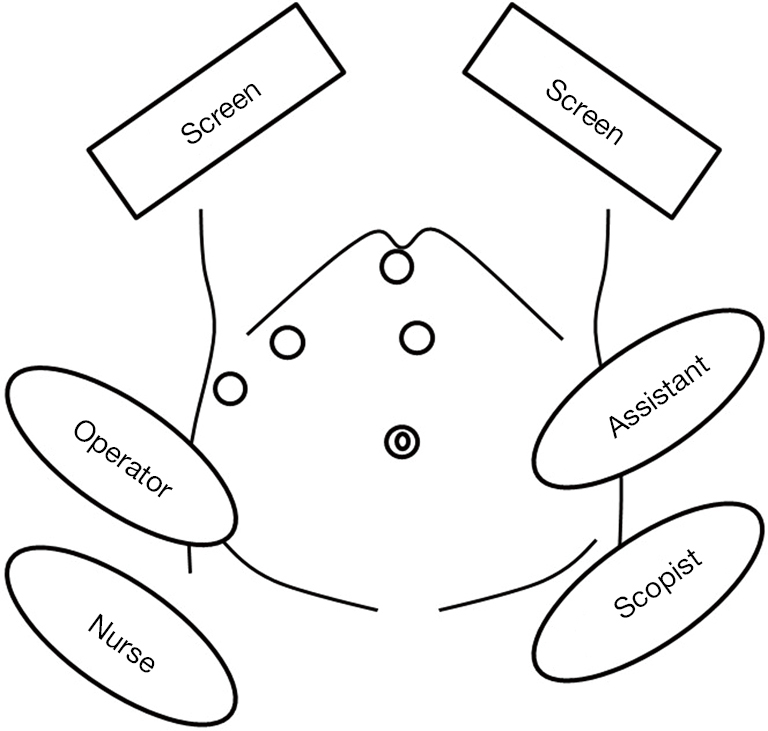 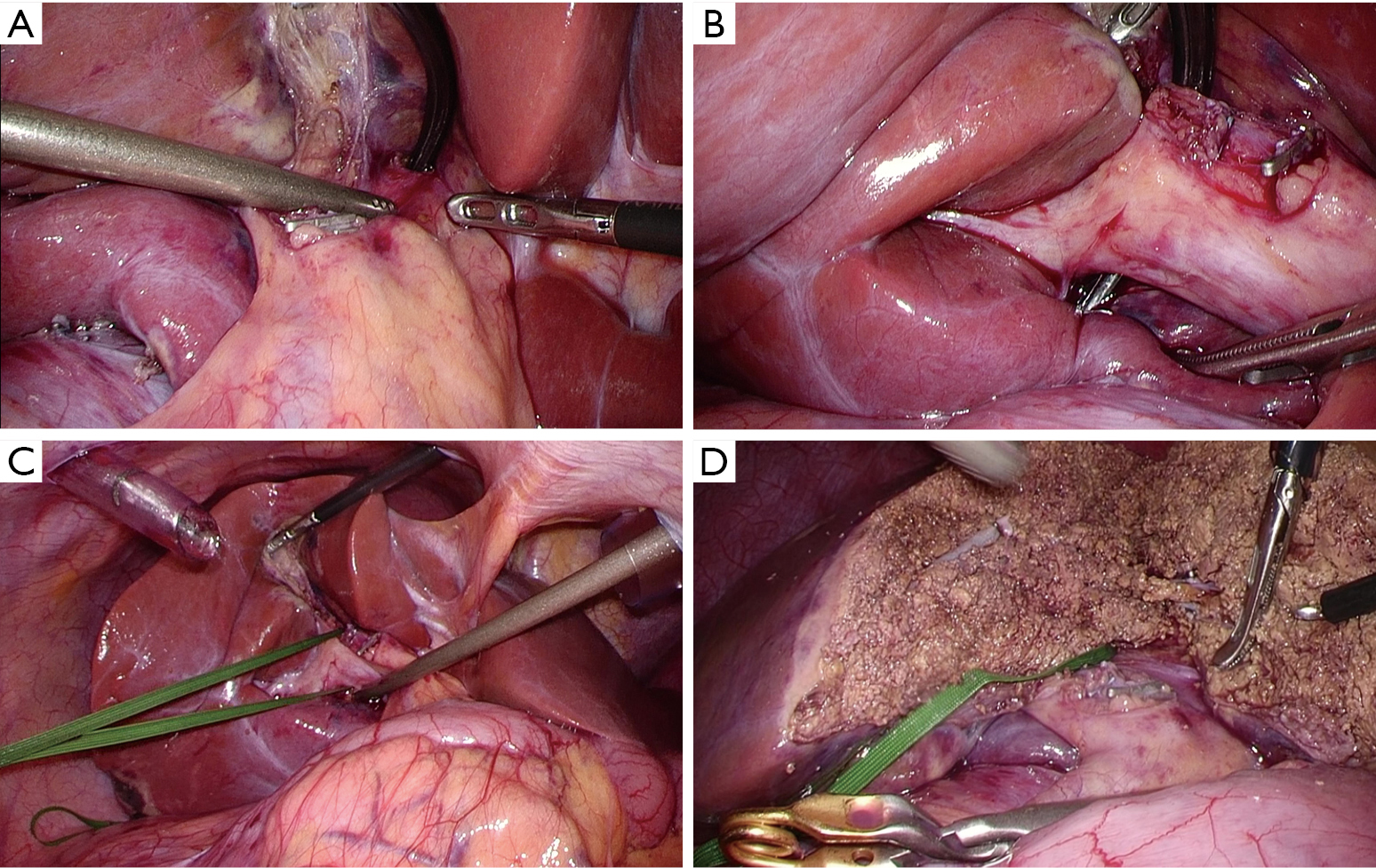 The encircled Glissonian pedicle functioned as an important landmark during the liver parenchymal transection. The parenchymal transection was proceeded between the demarcation line, the middle hepatic vein, the right Glissonian pedicle, and the inferior vena cava (Figure 2D). These landmarks avoided disorientation, which is one of the disadvantages of LLR. V5 and V8 were divided, and the caudate lobe was transected. After the liver parenchyma was completely transected, the right hepatic vein was encircled.

Patients were placed in the supine position with the reverse Trendelenburg position.

Four or five ports were placed, and all other setups were consistent with those of the right liver graft.

The left lateral section was mobilized, and the Arantius duct was divided. The hilar Glissonian pedicle was gently separated from the liver. A pair of forceps was inserted from the right edge of the root of the umbilical portion and put out from the cranial side of the divided Arantius duct (Figure 3A,B,C). The left Glissonian pedicle was temporarily clamped, resulting in revealing the demarcation line. 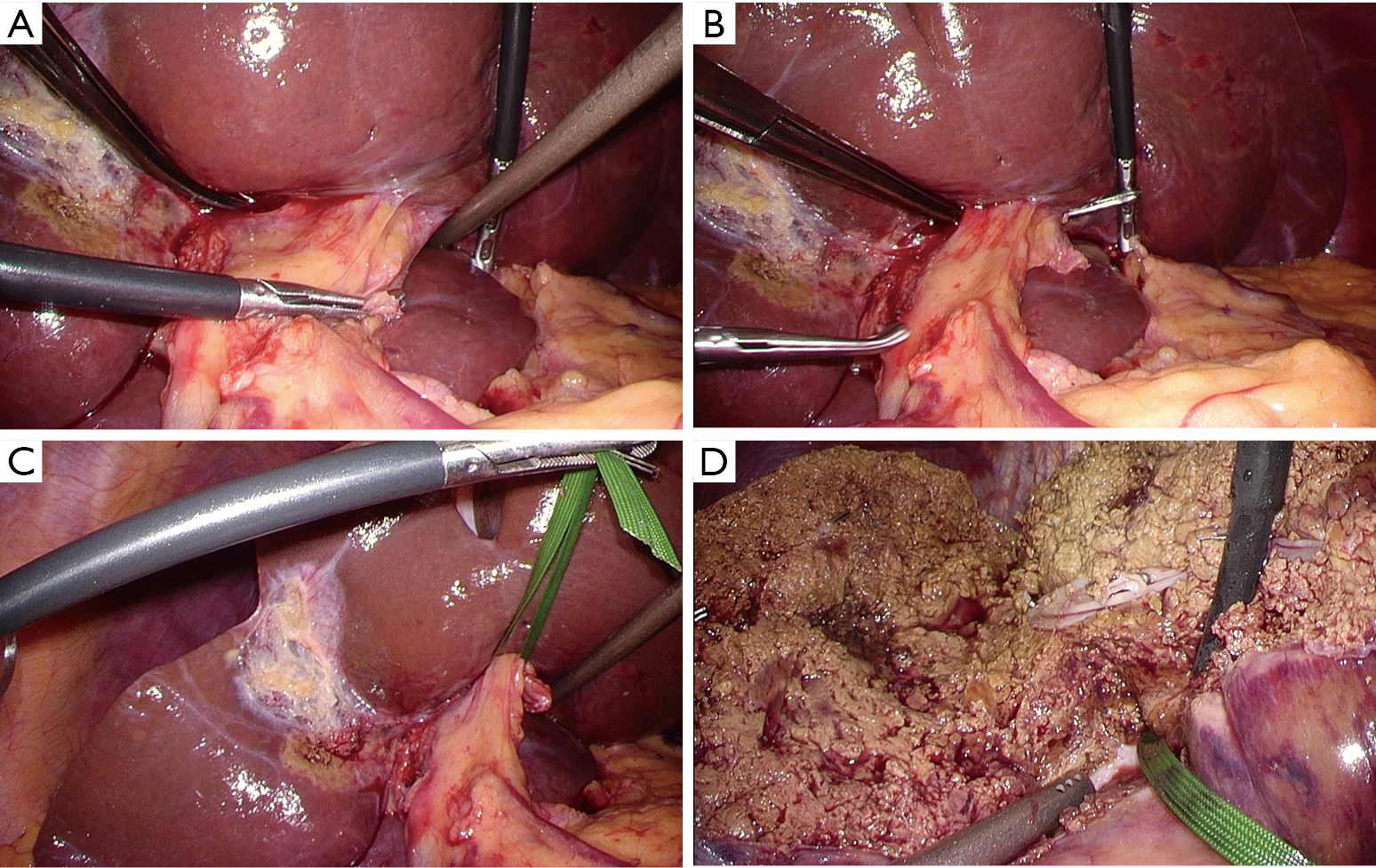 Figure 3 Glissonian approach for the left liver graft. (A) The forceps were inserted from the right edge of the root of the umbilical portion; (B) the forceps were put out from the cranial side of the divided Arantius duct; (C) the left Glissonian pedicle was encircled; (D) the liver parenchymal transection was proceeded between the demarcation line, the middle hepatic vein, the left Glissonian pedicle, and the Arantius plate.

At our institution, the Glissonian pedicle approach for PLDH was introduced in November 2017, and 14 patients underwent this procedure prior to June 2019. The number of right liver grafts without middle hepatic vein was 10, and the number of left liver grafts with middle hepatic vein was 4. The median surgical time was 384 min (range, 280–563 min), and the median amount of bleeding was 75 mL (range, 21–1,228 mL). The median warm ischemic time was 5 min (range, 2–10 min). Conversion to open laparotomy occurred in one patient (7.1%). A bile leakage of Grade IIIa (according to the Clavien-Dindo classification) occurred in one patient (7.1%).

Iwate Medical University is the only center that, to our knowledge, is using a laparoscopic Glissonian pedicle approach for donor hepatectomy. PLDH has not been widely accepted by surgical community due to concerns about both technical difficulty and safety. In other words, PLDH is a technique which is still being developed. Therefore, in order to identify the safest and most effective hepatectomy method, a variety of procedures should be considered.

The Glissonian pedicle approach, which is one method used for anatomical liver resection, was introduced by Couinaud and Takasaki (10,11). This method approaches to the portal pedicle on the hepatic hilum without parenchymal transection. Because various types of anatomical liver resections can be accomplished by this method, it is considered one of the important techniques in hepatectomy (12,13).

Additionally, we dissected the portal pedicle after liver parenchymal transection. This procedure serves a better surgical view during the hepatic hilum dissection. This is achieved because the surgical space was expanded by this step, which separates the right and left lobe. As the Glissonian pedicle dissection is relatively difficult procedure in laparoscopy due to movement restrictions, our strategy of conducting it after liver parenchymal transection might help overcome some of the disadvantages of LLR.

In conclusion, we considered that the Glissonian approach for PLDH can be successfully undergone with good surgical results. Of course, we can not compare outcomes of the Glissonian approach with those of the individual dissection approach. The choice of procedure is determined based on the operator’s preference. Nevertheless, we believe that this novel technique is effective for the treatment of PLDH.

Ethical Statement: The authors are accountable for all aspects of the work in ensuring that questions related to the accuracy or integrity of any part of the work are appropriately investigated and resolved. The study was approved by Iwate Medical University Institutional Ethics Board (No: MH2018-555), and informed consent was taken from all the patients.