Primary intrahepatic lithiasis (PIHL) is defined by the presence of stones that generate in the liver. PIHL may occur in any segment of the liver at the level of cystic dilatations of the intrahepatic biliary tree (1,2). PIHL occurs frequently in Eastern countries (especially Japan and Southeast Asia) and is less commonly reported in Europe and USA. Indeed, a recent report has shown that only 0.6–1.3% of patients presents with PIHL in Western countries (3). In a recent Japanese paper, epidemiologic results on PIHL were reported by conducting nationwide surveys seven times in the past, over a period of 40 years (4). In this study the rate of Japanese patients with PIHL was 24.7% in 1985 and progressively increased to 60.2% in 2011 (4).

Cystic dilatations of the intrahepatic biliary tree may remain asymptomatic for many years. When stones occur in the intrahepatic biliary tree, due to prolonged biliary stasis and to the presence of biliary strictures and dilatations, the patient can present with symptoms (generally abdominal pain and jaundice caused by stone migration into the common bile duct) (5,6). When patients are treated by endoscopic retrograde cholangiography in order to remove stones in the common bile duct and in the intrahepatic biliary tree, the direct contrast opacification of intrahepatic bile ducts can cause biliary infection and cholangitis may occur (7). Bile stasis and stone formation together with chronic inflammation and cholangitis cause a progressive atrophy of the surrounding liver parenchyma. Moreover, the epithelium of the bile ducts can show a dysplastic transformation, which may result in the development of cholangiocarcinoma (8). In a recent multicenter Italian study, among 161 patients with PIHL evaluated in five Italian hepatobiliary centers, 23 (14.3%) patients had developed an intrahepatic cholangiocarcinoma (9).

When PIHL is unilateral and localized to a single hemiliver or segment, liver resection may be considered the treatment of choice because it removes the stones together with the atrophic parenchyma with anomalous bile duct dilations and strictures, that are associated with the risk of developing cholangiocarcinoma.

Localized PIHL is particularly prevalent in the left lateral segment (6). When surgical treatment is planned, PIHL can represent a valid indication for the minimally invasive approach (10-12). It has been demonstrated that the laparoscopic treatment in such cases is safe but it should be performed by teams with expertise in both hepatobiliary surgery and laparoscopy (10-13).

The extent of the biliary anomaly is well defined by magnetic resonance imaging (MRI) of the liver with contrast enhancement and with cholangiographic reconstruction. When the anomaly involves the entire left hepatic duct including the ducts of segment 4, left hepatectomy should be indicated. In such cases it is fundamental to evaluate also the biliary ducts of the caudate lobe that may be involved by the disease. In order to avoid intrahepatic stones recurrence, if PIHL involves the left hepatic duct and the caudate lobe biliary ducts, a left hepatectomy extended to segment 1 should be indicated.

In left-sided PIHL, given to the appropriate indication criteria, left hepatectomy by minimally invasive approach may be considered as a standardized procedure and an excellent choice to treat the disease. Indeed, several studies have showed that laparoscopic left hepatectomy for PIHL is safe and effective and it is associated with significantly lower intraoperative blood loss, postoperative morbidity and shorter hospital stay (14-17).

In this paper we described the laparoscopic technique for left hepatectomy used in our Unit for patients with PIHL.

Following induction of general anesthesia, the patient is placed in supine position with the surgeon between the legs. The two assistants are on each side of the patient. The pressure-controlled CO2 pneumoperitoneum is usually maintained at 12 mmHg during the intervention. Laparoscopy is performed through a 30° camera. 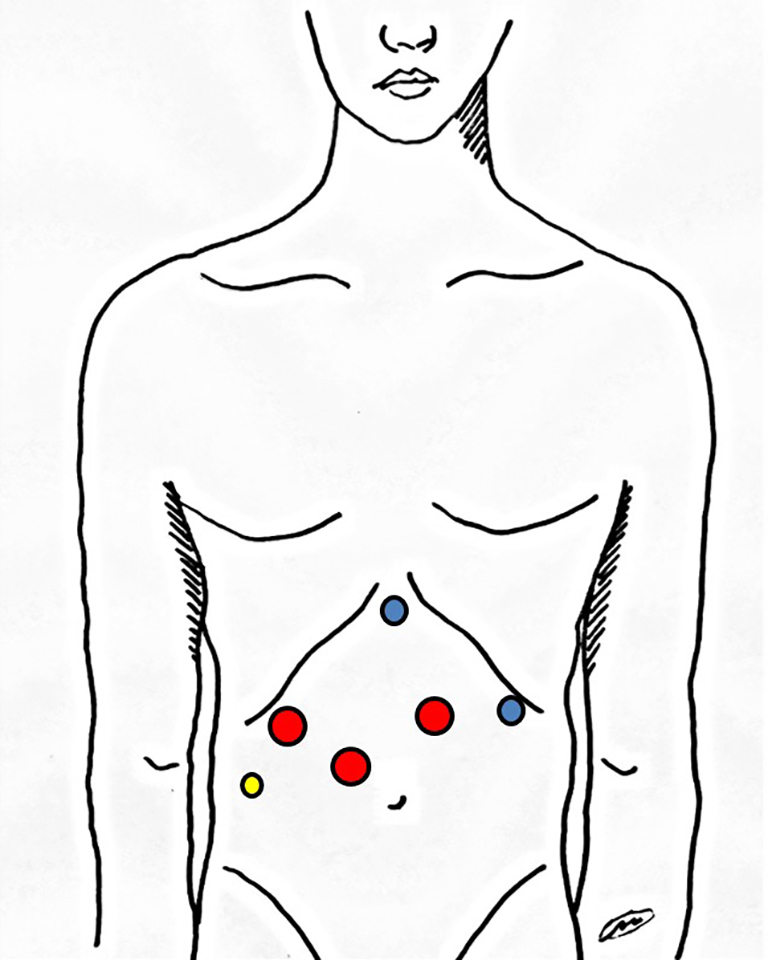 Hepatic pedicle is always encircled with a cotton tape that is externalized through a 5-mm incision and passed through a thoracic drainage (Figure 1). In this way the hepatic pedicle can be easily clamped from outside the abdomen when required.

The liver is always explored visually and by laparoscopic ultrasonography (Pro Focus 2202 Ultrasound System with Laparoscopic Transducer Type 8666-RF; Bk Medical, Herlev, Denmark) as the first step, in order to precisely assess the extent of intrahepatic bile duct dilations and to exclude presence of stones in the contralateral bile ducts. Laparoscopic ultrasound is also useful to guide the plane of parenchymal transection that, in case of previous cholangitis and presence of liver atrophy, could be difficult to follow.

The round and the falciform ligaments are divided by the 80-degree articulating vessel sealer (Aesculap Caiman; B. Braun, Tuttlingen, Germany). Dissection continues up to the anterior surface of the common venous trunk of the middle (MHV) and left hepatic vein (LHV). At this time, the left coronary and triangular ligaments are not divided in order to maintain the traction of the left lobe towards the left during the parenchymal transection. PIHL is a benign disease which involves the intrahepatic bile ducts and the surgeon will not have to face large tumors during transection. For these reasons, in such cases, the extraparenchymal control of the LHV before parenchymal transection is not routinely performed and the vein is usually divided intraparenchymally at the end of resection.

Before starting parenchymal transection, extraparenchymal isolation and division of the left hepatic artery and of the left portal vein, is usually performed.

When the lesser omentum is opened, the accessory left hepatic artery originating from the left gastric artery, if present, is divided using non-absorbable clip.

At the end of left hepatectomy, the left wall of the MHV should be visible on the cut surface of the right remnant liver. For this reason, to perform an anatomic left hepatectomy, before starting liver resection, the course of the MHV is checked by ultrasonography and marked on the liver surface. The line of parenchymal transection should be on the left side of the MHV.

When necessary the hepatic pedicle can be intermittently clamped.

When the parenchymal transection arrives at the level of the hepatic hilum, it is important to identify the left hepatic duct that is usually dilated with thick walls for previous infections. At this time the left portal vein, in case it has been only closed by clip, can be definitely divided. The left hepatic duct is dissected at a distance from the main biliary confluence and intraparenchymally divided by vascular stapler. If the biliary wall is particularly thick, the left hepatic duct can be divided and then closed by a running suture.

The final step is the isolation and division of the LHV that is usually intraparenchymally performed. Now the left hemiliver mobilization is completed by sectioning the left triangular and coronary ligaments. The LHV is isolated and encircled with a loop and then sectioned by a vascular stapler. The laparoscopic left hepatectomy is completed.

The resected specimen is removed through a small suprapubic incision by a plastic bag. The hemostasis and biliostasis of the cut surface is checked. One abdominal drainage may be left in place.

We thank Luigi Mele for the drawing in figure 1.

Provenance and Peer Review: This article was commissioned by the editorial office for the series “The Role of Minimally Invasive Liver Surgery to Treat Hepatic Benign Disease” published in Laparoscopic Surgery. The article has undergone external peer review.

Conflicts of Interest: All authors have completed the ICMJE uniform disclosure form (available at http://dx.doi.org/10.21037/ls.2020.02.07). The series “The Role of Minimally Invasive Liver Surgery to Treat Hepatic Benign Disease” was commissioned by the editorial office without any funding or sponsorship. FA served as the unpaid Guest Editor of the series. The other authors have no other conflicts of interest to declare.