Choledochal cyst is a congenital cystic dilatation (CCD) of the biliary tree. It may be associated to different hepatobiliary and pancreatic disorders (1). This rare disorder is most common in Asia with two thirds of cases occurring in Japan (2).

In most of the cases the diagnosis is done in the childhood, although adult cases have been reported in large series. Due to the malignancy risk a radical resection of the cyst with Roux-en-Y hepatico-jejunostomy is mandatory (8,9). Laparoscopic approach is becoming more and more widely adopted.

A 25 years old woman was referred to our Institute for long lasting abdominal pain. Abdominal ultrasound showed the presence of a hilar cystic lesion with apparently absence of gallbladder. MRCP findings were in favor of diagnosis of Todani 2 choledochal cyst but the communication between the cystic lesion and bile duct was not detected (Figure 1). Endoscopic ultrasound (EUS) confirmed the diagnosis of a 28-mm Type II choledochal cyst located in the middle part of bile duct. Accordingly, EUS didn’t show any communication between the choledochal cyst and the choledochus, probably due to a short and very narrow neck of the cystic lesion. No anomalies of bilio-pancreatic junction were detected. Liver tests were all normal. After discussion in our multidisciplinary meeting (MDT), a laparoscopic resection of the cyst, eventually extended to the bile duct, and Roux-en-Y hepaticojejunostomy were scheduled. 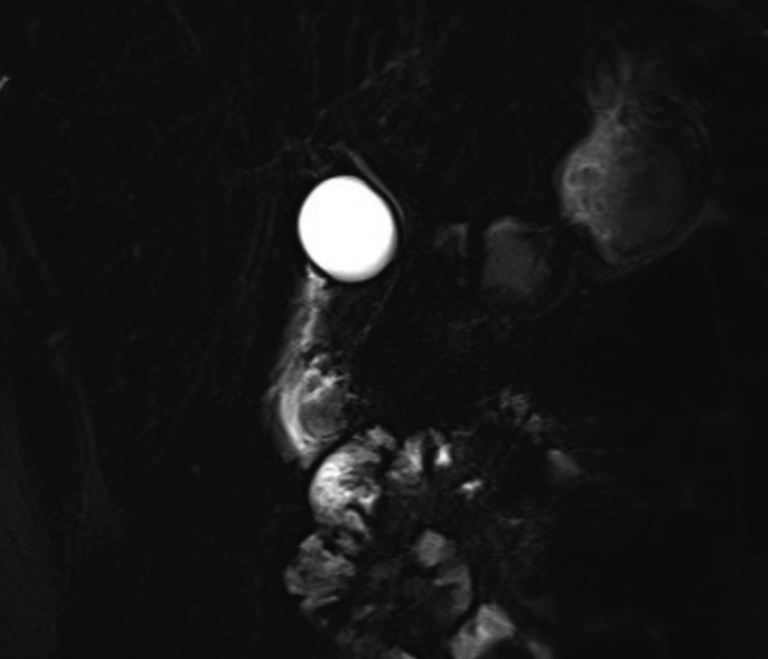 Under general anesthesia, the patient was placed in French position. The surgeon standed between the patient’s legs, the first assistant was on the right of the patient and the second assistant, as well as the nurse scrub, were placed on the left of the patient. The procedure required five ports. The pneumoperitoneum was inflated through a 12-mm midline port, which will be used to place the camera, approximately 2 cm above the umbilicus. Two 10-mm ports were placed on the mid-clavicular line of both sides, 1 cm cranial to the camera port. A 5 mm epigastric port was placed under the xiphoid process. One additional port will be inserted later to realize the anastomosis on the left flank (Figure 2). The table was placed in reverse Trendelenburg position to facilitate displacement of the transverse colon and small bowel from the operative field. 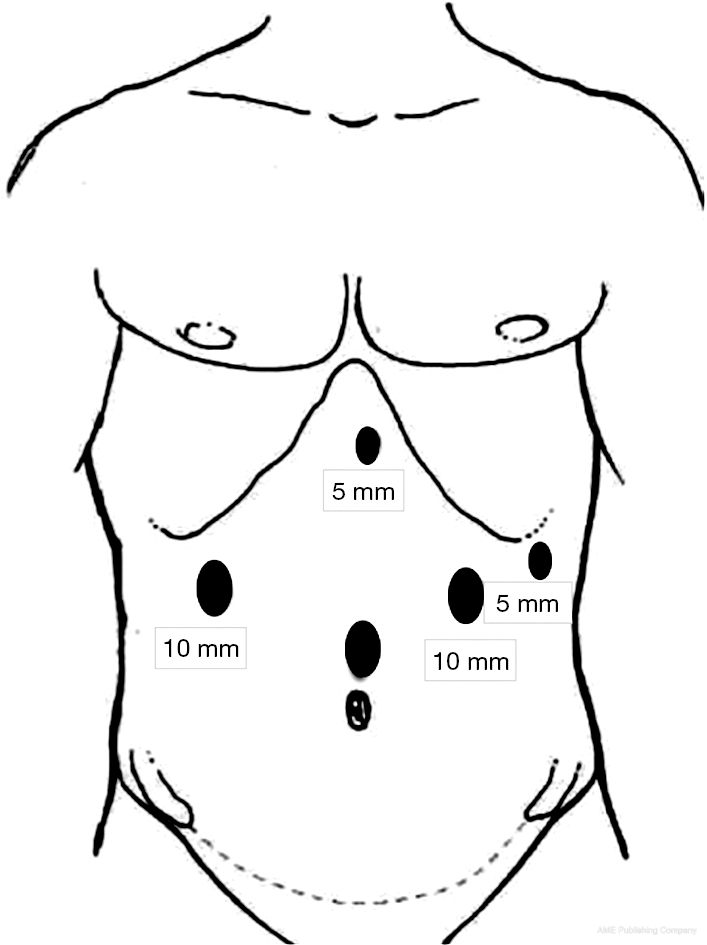 The choledochal cyst was located on the right part of the hilum, affecting the medial third of the common bile duct very close to the gallbladder (Figure 3). Surgery began with complete dissection of structures within Calot triangle. Once identified and partially cut the cystic duct, we realized an intraoperative cholangiography showing a non-dilated common bile duct and absence of communication with the cystic lesion probably because of a short, edematous and inflamed neck. After completed the cholecystectomy, the gallbladder was stored in an endo-bag and then extracted. 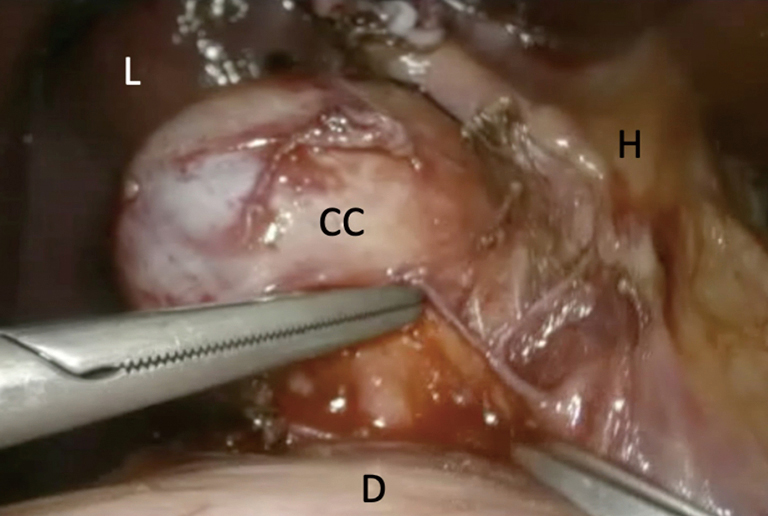 We encircled the common hepatic duct and the choledochus with a first tape upstream and a second one downstream the borders of the cystic lesion (Figure 4). 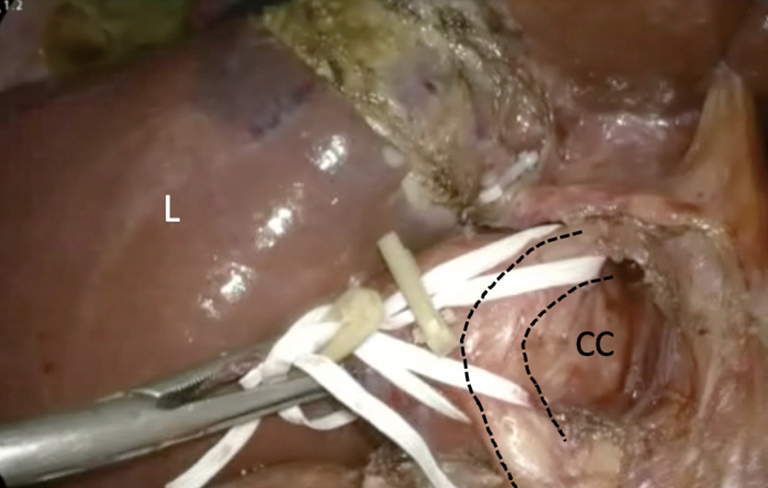 After being completely dissected and freed from the hilum, the choledochus was stapled with a linear EndoGIA® (Figure 5) while the common hepatic duct was cut with the scissors. The specimen was removed through an extension of the 10 mm right port incision using a lap bag.

Figure 5 Choledochus is sectioned with a stapler. (A) CC: choledochal cyst; (B) Ch: choledochus.

To realize a Y-en-Roux hepatico-jejunostomy the jejunum was divided at 60 cm distal to the Treitz ligament using an EndoGIA® linear stapler. The limb was then pulled through an opening created in the mesentery of the transverse colon.

A suction drain was left in the Morrison space. Fascia of extraction incision and ports sites ≥10 mm were closed and all skin incisions closed with subcuticular suture. Operation time was 360 minutes. Post-operatively, the patient experienced a bleeding arising from the stapler line of the cul-de-sac of the Roux en Y loop managed conservatively. Abdominal drain was removed at postoperative day 2.

Postoperative CT-scan was normal, and the patient was discharged at post-operative day 8.

Histopathological analysis confirmed the diagnosis of choledochal cyst with low-grade dysplasia and no evidence of malignancy.

The typical presentation of choledochal cyst, including abdominal pain and jaundice has been reported only in 6% of cases, although cases of unusual presentation have been described. CDCs are more frequent in females with 3:1 ratio (10).

CDCs are frequently associated with pancreaticobiliary maljunction (PBM). PBM is a congenital anomaly defined as a junction of the pancreatic and the bile ducts located outside duodenal wall with as a long common channel (>10 mm). As the pancreatic duct pressure is higher than the one in the bile duct, pancreatic juice can leak back in to the common bile duct leading to inflammation of the biliary epithelium and potential biliary carcinogenesis (5).

Symptoms of choledochal cyst differ according to the period of presentation. In children jaundice is the most common symptom while adults usually present other symptoms. Cystic stones are described in 49% of cases, followed by cholangitis (32%), acute pancreatitis (10%) and chronic pancreatitis (2%) (6,11).

Due to the risk of cholangiocarcinoma development (3%) cyst resection is mandatory followed by hepaticojejunostomy, choledochojejunostomy or hepaticoduodenostomy (12).

The first case of laparoscopic choledochal cyst resection has been described in 1995 by Farello (13) and safety and feasibility have been confirmed thereafter. Mini-invasive approach has a lot of advantages over laparotomy including small incisions, magnification of the surgical field, less intraoperative bleeding and abdominal wall complication (1,14).

Laparoscopic biliary surgery is not widely adopted because of the complexity of the procedure and the need of skilled surgeons (14,15).

An extensive review of the literature was conducted with 12 publications of large case series and retrospective studies being identified and reviewed. Among them four are comparative studies, being the rest single center non-comparative (Table 1). As expected, there are no prospective studies. 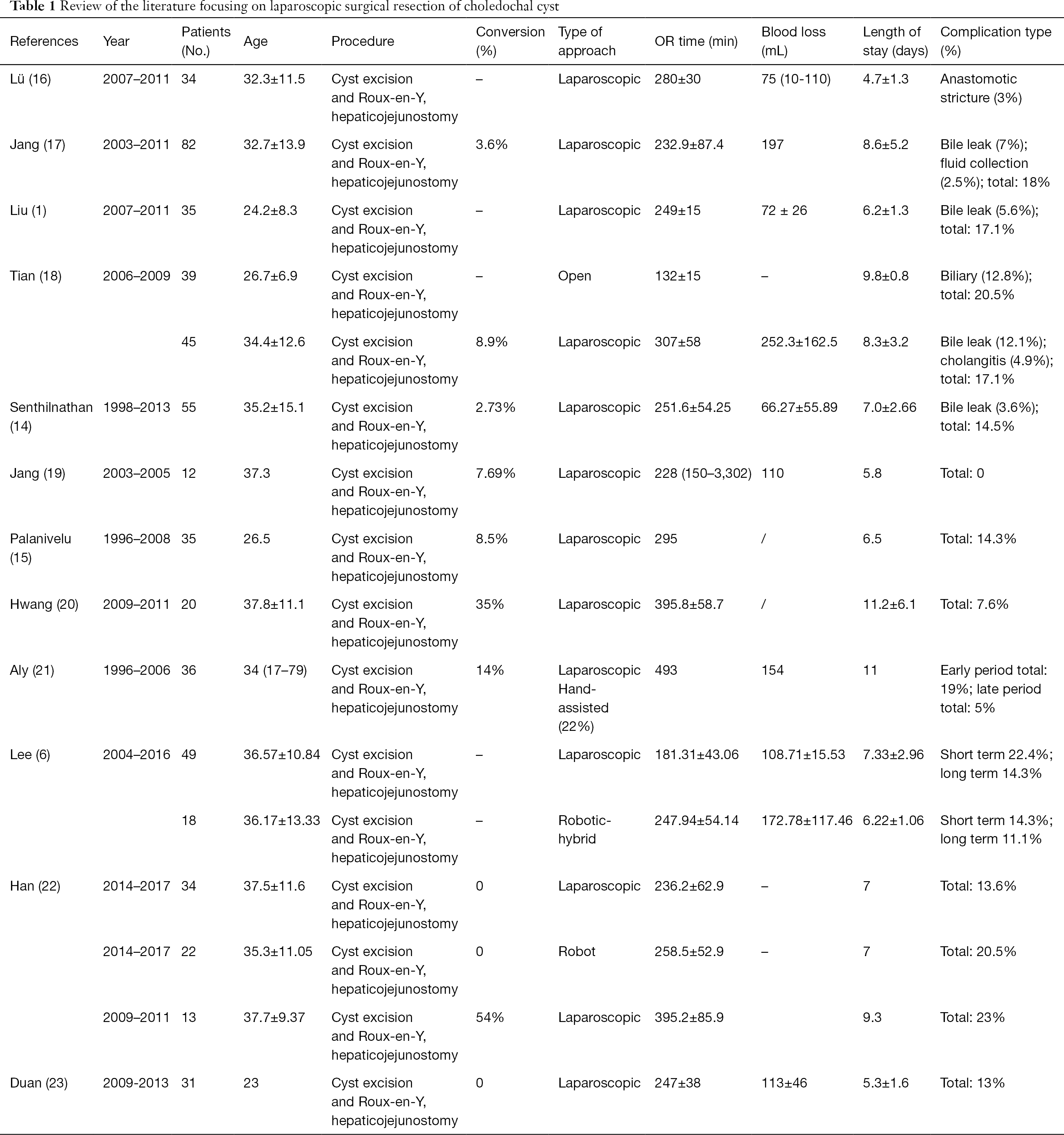 Liu et al. showed that compared with open operation, the total laparoscopic approach had a longer operative time (249±58 vs. 132±15 min with open approach) (1). The importance of learning curve has been clearly showed by their results as the laparoscopic operative time decreased significantly to 190 min after the first 20 cases.

This concept has been confirmed by Aly et al. in 2017 (21). In their series of 36 patients with CCDs laparoscopically treated, they reported an early- and late post-operative complication rate respectively of 19% and 5%. In 3 patients an emergency laparoscopic re-do surgery was needed. Authors also compared results from the former period with those from the latter period showing less operative blood loss, open conversion rate and hospital stay in the last period underlying the importance of learning curve in a such complicated surgery.

A morbidity rate of 20% and a mortality rate of 3.3% have been reported by Tian et al. in a series of 60 adult patients who underwent laparoscopic surgery (18).

The most common complications reported by Jang et al. in a series of 82 patients were minor biliary leakage (7%) and fluid collection (2.5%), both managed conservatively (17).

In a series of 110 patients (55 adults and 55 children), Senthilnathan et al. reported an overall complication rate of 10% with a re-exploration rate of 1.81% and 1 post-operative death due to acute severe pancreatitis with multi-organ failure (14). Authors showed that laparoscopic approach to choledochal cyst is safe and feasible. Well known benefits of minimal invasive surgery such as magnification of surgical view, less intraoperative bleeding, better control of post-operative and better cosmetic results have been also found in the surgical scenario.

Shorter hospital stay is another advantage of minimal invasive approach compared to open surgery, as showed by Lü et al. (16).

No difference in term of morbidity and mortality rates has been found between the two surgical approaches (15). Authors suggested to leave a proximal cuff of the cyst in order to make the hepatico-jejunostomy anastomoses easier.

A post-operative complication rate of 22.4% has been reported by Lee et al., being the biliary leakage the most common (7.14%) (24). In this paper, authors compared totally laparoscopic versus laparoscopic dissection followed by robotic hepatico-jejunostomy and they concluded that robotic surgery allows for more precise and secure sutures during anastomosis, thereby reducing biliary complications.

Another paper comparing robotic versus laparoscopic approach found no difference in terms of complications (22). Authors managed to shorten operative time by performing extracorporeal jejuno-jejunostomy. Thereby there are some advantages by using robotic approach, such as better intracorporeal suturing and provision of a good 3D visual field.

Hwang et al. underlined the importance of the learning curve in such complex surgery and suggested that laparoscopic approach will eventually become an advantageous treatment option for selected patients (20). In their series, laparoscopic excision of choledochal cyst was attempted in 20 patients with a conversion to laparotomy rate of 35% due to: bleeding, Roux loop venous congestion, abdominal obesity and severe fibrosis and inflammation around the cyst. Authors reported a mean operative time of 398.8±58.7 min and a mean postoperative hospital stay of 9.3 days.

Biliary complications were the most common complications after laparoscopic approach to CCDs also in the series of 67 patients, mainly adults, published in 2016 by Moslim et al. (25).

Type II CCD, defined as extrahepatic bile duct diverticulum, is rare (between 0.8% and 5% of all reported CCDs cases). At the time of writing, the biggest series (19 patients) of Type II CCD surgically treated, is the European Multicenter Study of the French Surgical Association, being the others reports only single cases or small series (26). In the French multicenter study, all patients underwent choledochal cyst resection despite the extrahepatic bile duct has been resected in only 11 patients (57.9%).

Laparoscopic approach was attempted in three patients but due to technical difficulties and bile duct injury surgeons were obliged to convert in all cases.

In our case, we associated a bile duct resection as we found the hepatic pedicle to be inflamed and this did not allow separating the choledochal cyst from the biliary duct.

We managed to complete the surgery laparoscopically despite a challenging hepaticojejunostomy due to the small size of the proximal bile duct stump.

Laparoscopic resection of choledochal cyst with hepaticojejunostomy is safe and feasible based on our case and review of the literature. Patients have shorter hospital stay and outcomes are comparable to the open approach.

Operative time is longer but decreases with the learning curve. Due to the technical difficulties it should be performed in reference centers by surgeon with experience in laparoscopic and biliopancreatic surgery.

Patients should be followed at long term in order to detect late complications and malignancy.

Provenance and Peer Review: This article was commissioned by the Guest Editor (Francesco Ardito) for the series “The Role of Minimally Invasive Liver Surgery to Treat Hepatic Benign Disease” published in Laparoscopic Surgery. The article has undergone external peer review.

Conflicts of Interest: All authors have completed the ICMJE uniform disclosure form (available at http://dx.doi.org/10.21037/ls.2020.03.09). The series “The Role of Minimally Invasive Liver Surgery to Treat Hepatic Benign Disease” was commissioned by the editorial office without any funding or sponsorship. The authors have no other conflicts of interest to declare.