Minimally invasive surgical approaches nowadays are employed as treatment for gastrointestinal malignancies but also for benign diseases. Minimally invasive fundoplication was first described in the early 90’s (1) with the intent to reduce the invasiveness of surgical procedure for benign diseases such as gastroesophageal reflux disease (GERD). About of a decade after, Cadiere performed the first robot-assisted laparoscopic Nissen fundoplication (NF) in a groundbreaking moment of the worldwide surgical panorama (2). Since then several studies comparing the robotic-assisted fundoplication with the laparoscopic one, were carried out (3-5). Nissen, Toupet and Dor are the mainly performed techniques of fundoplication with robotic approach, differing in the grade of wrap around esophagus of 360°, 270° and 180° respectively (6-8) (Figure 1).

This study aims to give a snapshot on robotic fundoplication, comparing the three techniques.

NF represents the most performed surgical procedure for GERD not responsive to pharmacological therapy (9-11). Since the first description, this technique provides a complete mobilization of the stomach fundus followed by a 360° posterior fundoplication. At the beginning of the XXI st. century, the first computer-assisted NF in response to the pure laparoscopic approaches were performed (2,12). Patient is placed in a supine and steep reverse Trendelenburg position on the operating theatre table. After the establishment of pneumoperitoneum, trocars placement follows the same scheme used in other gastro-esophageal surgical procedures, using two or three robotic arms associated to one or two assistant trocars. The scheme is the same for the three techniques and the positions of assistant trocars depends on surgeon preferences. Figure 2 depicts trocar placement. 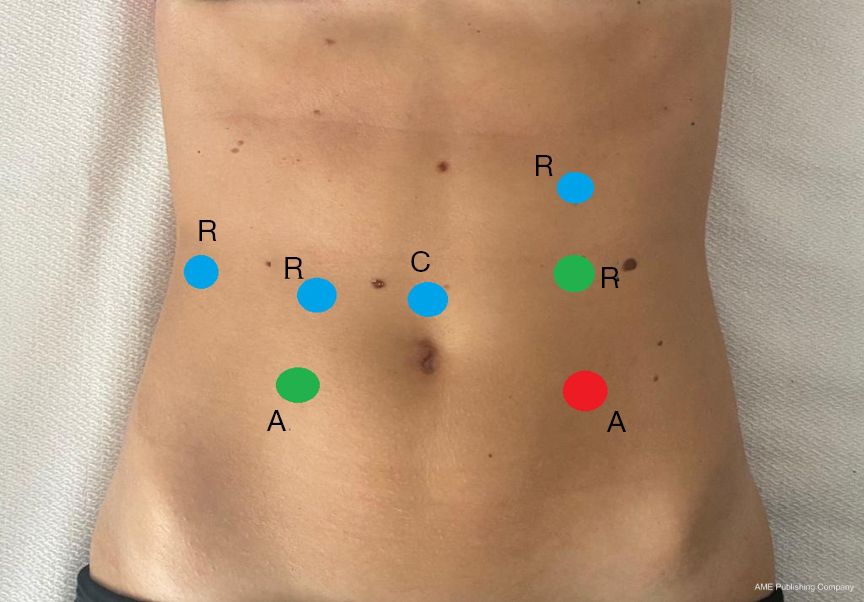 The standardized laparoscopic approach to floppy NF is generally adopted: opening of the phrenoesophageal ligament in a left-to-right way and preserving of the hepatic branch of the anterior vagus nerve; dissection of crura and transhiatal mobilization is performed to allow approximately 3 cm of intra-abdominal esophagus; in order to ensure a tension free-wrap, short gastric vessel are divided and the crural is closed posteriorly with non-absorbable sutures. The procedure concludes with posterior wrap construction of about 2 cm, placing a bougie and with the most distal suture incorporating the anterior muscular wall of the esophagus (13,14).

Toupet fundoplication (TF) technique is similar to Nissen but stomach wrap finally results in a partial posterior plication of 270°.

In the Dor fundoplication (DF) technique the wrap is constructed anteriorly, with a partial 180° rotation, in which the lateral edges of the plication are represented by the great curve of the stomach sutured to the right and left crura. Generally, DF is associated to the Heller myotomy in the treatment of esophageal achalasia and the wrap is developed covering the miotomized area (15).

Not seem to exist specific intraoperative complications due to the similarity within the three techniques except for the obvious higher risk of esophageal perforation due to myotomy in DF rather than NF and TF. Robotic fundoplication, particularly NF, when compared with laparoscopic one had shown no significant difference in terms of operative time (mean range between 88–137 vs. 91–102 minutes), conversion rate (3.4% vs. 3.3%), intra and postoperative complications (5% vs. 9%) also for dysphagia (16.6 vs. 16.1%), reoperation rate (7.4% vs. 3.6%), length of hospital stay (mean from 2.9 to 4.4 vs. 3.3 to 4.1 days) and costs (the difference between robotic and laparoscopic procedures was about 500–1,800 euros) (16).

Data available on robotic TF are very limited (5,17). To date the literature available concerns TF performed in association with others procedure, or results pooled in series including other types of fundoplication and then no specific data can be obtained (18,19).

Studies comparing the laparoscopic DF with posterior total or partial fundoplication have been performed without reaching sufficient evidence to support its recommendation as surgical treatment for GERD (20,21). However less postoperative dysphagia in anterior fundoplication were noted, contrariwise a less reflux symptoms control was achieved (22,23). Actually reports dealing with robotic DF are those in which this fundoplication technique is performed in combination with Heller myotomy in the management of esophageal achalasia.

As for postoperative dysphagia, laparoscopic NF and TF were compared in term of variable lengths of fundoplication (1.5 vs. 3 cm) (24). Superior reflux symptoms control in 3-cm-TF over the 1.5-cm t without differences in postoperative dysphagia have been reported. Instead in NF, length did not influence reflux control, but a higher rate of dysphagia was noted in 3-cm wrap group compared with the 1.5-cm ones (25,26).

Need for recurrence has been reported with mixed results. Strate et al. reported a higher reoperation rate in NF than TF cause of the persistence of dysphagia probably due to different preoperative esophageal dysmotility (22). Also concerning reinterventions rate, anterior fundoplication requires redo-surgery for scarce control of reflux rather than posterior ones (23).

Although robotic surgery had proper characteristics, we could consider it as an advanced laparoscopic approach and thus we could liken the available data concerning the laparoscopic NF, TF and DF to the corresponding robotic ones. Robotic technology has made possible to overcome some of the limitations of laparoscopic surgery including a reduction in tremors, the magnifying images with 3D technology, an increase in the effectiveness of surgical gestures through tools with more degrees of freedom, and mostly a great improvement in fatigue in relation to the continuation of surgery. If compared laparoscopic and robotic surgical approaches to GERD, seemed to be similar in adult and children in terms of operative times, length of hospital stay and post-operative complications. Robotic surgery shown obvious higher costs; some specific complications due to the lack of haptic feedback combined with the overhuman strength robot-assistance like gastric perforation during fundoplication were also reported (15,28,29).

Robot-assisted NF as surgical treatment for GERD is the most performed, codified and reported between robotic approaches since its early employments. Further studies analyzing the different techniques of robotic fundoplication are needed to better compare them and to suggest the best one to perform in routine surgical practice.

Provenance and Peer Review: This article was commissioned by the Guest Editor (Andrea Balla) for the series “Minimally Invasive Approach for the Treatment of Gastro-esophageal Reflux Disease” published in Laparoscopic Surgery. The article has undergone external peer review.

Conflicts of Interest: All authors have completed the ICMJE uniform disclosure form (available at http://dx.doi.org/10.21037/ls-20-87). The series “Minimally Invasive Approach for the Treatment of Gastro-esophageal Reflux Disease” was commissioned by the editorial office without any funding or sponsorship. The authors have no other conflicts of interest to declare.