Morbidity and mortality rates of living donor hepatectomy are significantly lower than hepatectomy for other disease (1). However, the safety of living liver donors is of paramount importance issue so far (2,3). In addition, the major drawbacks of living liver donation are that living donor hepatectomy is one of the major abdominal operations and occurs considerable adhesion and large operation scars in the upper abdomen. Permanent large incision scar gives young donors physical and mental stress. Surgical staffs should make the best effort to resolve the future quality of life, along with the safety of living liver donors. A minimal invasive approach to donor surgery has been developed as an alternative to solve these problems and is constantly evolving.

Blood loss is one of the main causes that affect surgical outcomes in laparoscopic liver resection (LLR). Bleeding must be a major concern for the donor surgeon in LDLT. This serious issue certainly induces the major intra-operative complications and can be one of the main causes of donor mortality and the major postoperative complications with bile leaks and hepatic failure (9-12). Hemostasis achievement during liver mobilization and parenchymal transection obviously have an effect on the successful completion of donor surgery. The main advances in reducing intra-operative bleeding has been achieved through the improvement of surgical techniques and the development in surgical instruments. Most bleeding can be encountered during transection of the liver parenchyma, which greatly affects operative time, intra-operative blood loss, blood transfusion, and postoperative morbidity and mortality (13). Introduction of various energy devices for laparoscopic surgery play an important role in reducing intra-operative blood loss during LLR.

We present the following article in accordance with the MDAR reporting checklist (available at http://dx.doi.org/10.21037/ls-20-22).

We started the first pure laparoscopic donor hepatectomy (PLDH) in May 2016 and a total of 79 donors received a PLDH by December 2019. All PLDHs were performed without total inflow control, such as the Pringle maneuver, but we have never experienced blood transfusion and open conversion. We would like to briefly describe our experience and several reports on clinical applications and technical tips of PLDH. The study was conducted in accordance with the Declaration of Helsinki (as revised in 2013). The study was approved by the Institutional Review Board of Kyungpook National University Hospital (KNUH) (No. KNUH 2020-04-054-002) which waived the need for informed consent from all individual participants.

Liver mobilization is able to carry out through the dissection of ligament attachments between the liver, retroperitoneum, diaphragm, inferior vena cava (IVC), and right adrenal gland. The key feature of laparoscopic liver mobilization prevents unnecessary injuries to the IVC and hepatic veins. For safe liver mobilization, it is essential to achieve careful control of small hepatic veins with energy devices and/or clips (14).

In LLR, advances in techniques and surgical instruments for parenchymal transection have facilitated a reduction of blood loss that occurred during liver resection. Control of intra-operative bleeding has been one of the significant technical issues in laparoscopic liver surgery. Various devices for the liver parenchymal transection in both open and minimally invasive liver surgery has been introduced and a few studies have reported that ultrasonic energy devices have the effect of shortening operative time and reducing postoperative complications (15,16). On the other hand, another study reported that bipolar compression devices may offer advantages over ultrasonic devices in terms of shorter total operative time, along with liver parenchymal transection time (17). However, there was no convincing data evidencing the superiority of any single technique, although there are at least 10 different techniques (18).

Ultrasonic devices cut and coagulate using the vibration of its blades. Theoretically, ultrasonic devices seal and cut the vessels simultaneously to allow for faster tissue division. The parenchyma is also divided with secure hemostasis when the blades move in a saw-like fashion. And, small vessels (≤3 mm) can be controlled quickly and safely by ultrasonic devices (26).

The choice of surgical technique and instruments depends entirely on the location and depth of liver transection as shown in Figure 2. The caudate lobe is easily transected using energy devices after liver mobilization (Figure 2A). Parenchymal transection in superficial layer is also performed using ultrasonic devices because the superficial layer from liver surface does not have any significant structures (Figure 2B), but in transection of deeper parenchyma, hepatic dissection device such as CUSA is more useful (27). The surface of the hepatic parenchyma up to 2 cm can be easily transected without bleeding by a Sonicision (Medtronic, Dublin, Ireland), Harmonic scalpel (Ethicon Endosurgery, Cincinnati, OH, USA) or Thunderbeat (Olympus Medical Systems Corp, Tokyo, Japan). For deeper parenchymal transection, we also used a CUSA to safely dissect intra-hepatic structures such as major hepatic veins and the branches of hepatic vein (V5 and V8) or biliary structures (Figure 2C), as with other reports (28-30). If no important structures are identified even during the parenchymal transection of deeper layer, ultrasonic device can be used to quickly transect the parenchyma, as shown in the video (Video 1). In the final stage of PLDH, including the transection of hepatic artery, portal vein and hepatic veins, energy devices allow faster dissection of remaining tissue for the rapid extraction of liver graft (Figure 2D). 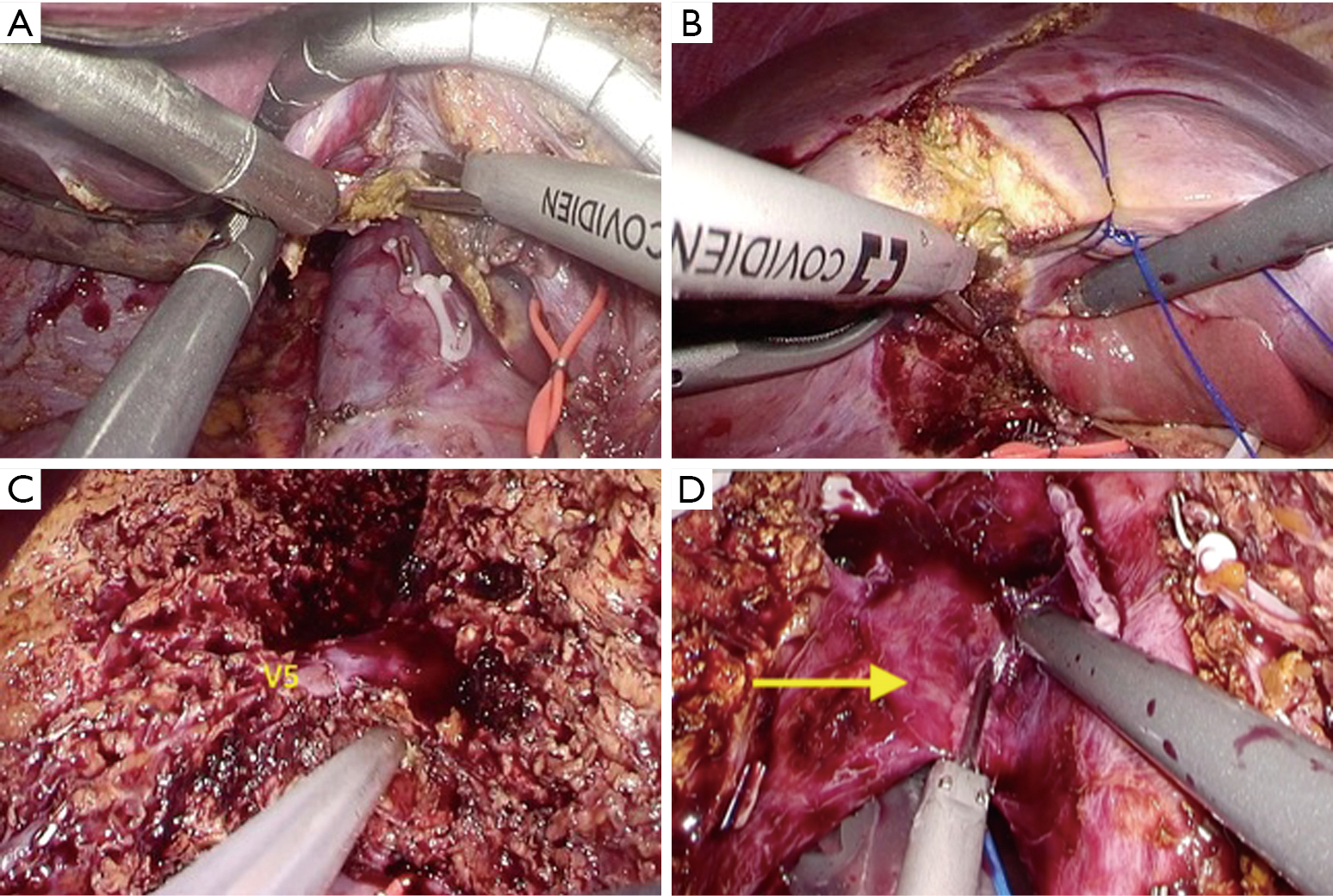 Many devices are now introduced for transection of the liver parenchyma in both open and laparoscopic surgery including: CUSA, Harmonic Scalpel, Thunderbeat, Sonicision, water-jet dissection, radiofrequency, microwave assisted resection, and so on. Of them, CUSA has been the most frequently used instrument for parenchymal transection during PLDH and one additional energy device is combined to reduce operation time and minimize the postoperative complications. The optimal combination and selection of energy devices depends on surgeon’s preference and familiarity.

Rhu et al. (32) reported that they used sometimes the ultrasonic shear dissector (Sonicision) alone without the CUSA to complete the dissection. This is also a surgeon’s preference and it would have been implemented based on a wealth of experience. If there are usually no major vessels found at the parenchyma up to 1–2 cm from the surface, this application of the ultrasonic shear device can be done to quickly divide the liver. But blind dissection requires great care. During parenchymal transection, meticulous dissection to preserve the major vascular branches along the resection plane and to minimize the bleeding risk, is essential for excellent results of donor surgery.

Donor safety is paramount in LDLT. Adopting the standardized techniques and accumulating experiences for use of energy devices allow meticulous dissection in liver resection. Therefore, precise identification of vascular or biliary structures, and elective hemostasis is the cornerstones and the basic skills of PLDH. For continued safe proliferation of PLDH, it is meaningful for the surgeons to clearly understand the advantages and limitations of energy devices. And, energy devices should be used in combination, depending on their functions and the depth of liver parenchyma. Finally, the technology of energy devices should be continuously improved to accomplish the safe PLDH, and the surgical techniques associated with energy devices must be consistently standardized and validated.

Reporting Checklist: The authors have completed the MDAR reporting checklist. Available at http://dx.doi.org/10.21037/ls-20-22

Conflicts of Interest: Both authors have completed the ICMJE uniform disclosure form (available at http://dx.doi.org/10.21037/ls-20-22). The series “Pure Laparoscopic Donor Hepatectomy” was commissioned by the editorial office without any funding or sponsorship. The authors have no other conflicts of interest to declare.

Ethical Statement: The authors are accountable for all aspects of the manuscript in ensuring that questions related to the accuracy or integrity of any part of the manuscript are appropriately investigated and resolved. The study was conducted in accordance with the Declaration of Helsinki (as revised in 2013). The study was approved by the Institutional Review Board of Kyungpook National University Hospital (KNUH) (No. KNUH 2020-04-054-002) which waived the need for informed consent from all individual participants.