Posterior partial fundoplication (PPF) was described by Andrè Toupet as an open procedure in 1963, in attempt to reduce the rate of dysphagia and gas bloat syndrome that occurred after Nissen fundoplication (4). The operation was performed through a midline incision, and the original technique described a partial wrap of the gastric fundus behind the mobilized esophagus without short gastric vessels division. This technique initially proposed as a 180° posterior wrap, and subsequently modified to a 270° wrap, did not originally include a hiatoplasty except in case of very enlarged hiatus.

Proponents of the Toupet technique argue that, allowing patients to vent air from the stomach, PPF could result in minor mechanical disadvantages in comparison to total fundoplication, without losing efficacy on reflux control (5).

With the advent of laparoscopy and the recognition of its advantages over the open approach, this technique has been translated into minimally invasive surgery (6). However, data specifically assessing the comparison between open and laparoscopic posterior partial fundoplication (LPPF) are scarce. Only Hakanson et al. reported the results of a randomized controlled trial comparing 93 patients submitted to open and 99 patients to LPPF (7). This study showed that complication rates and length of stay were higher in the open group, while at medium-term follow-up (3 years) there were no differences in terms of reflux control, use of medications and overall patients’ satisfaction between the two groups. For these reasons, laparoscopic surgery was considered the treatment of choice.

The aim of this paper is to provide a narrative review the literature on the results of minimally invasive Toupet fundoplication technique. We present the following article in accordance with the Narrative Review reporting checklist (available at http://dx.doi.org/10.21037/ls-20-101).

The procedure can be formed laparoscopically or with the robotic approach (8). When performed laparoscopically, five trocars are needed; when performed with the DaVinci Xi Surgical System (Intuitive Surgical Inc., Sunnyvale, CA, USA) four robotic trocars are introduced, and two additional laparoscopic trocars are placed for exposure. Operative steps are the same either with the laparoscopic and the robotic approach. The first step of the procedure is the exposure of the esophageal hiatus: the right and left diaphragmatic crura are visualized and the posterior aspect of the esophagus is dissected in order to create a retroesophageal window. A vessel loop is passed around the esophagus to provide inferior traction, helping esophageal mobilization, until at least 2–3 cm of the lower esophagus remain in abdomen without tension. At this point the gastric fundus can be pulled behind the esophagus to the right of the patient, without short gastric vessel division. A hiatoplasty with interrupted stitches is required. The gastric fundus is then anchored to the right and to the left aspects of the esophagus with interrupted stitches (Figure 1). Furthermore, some authors propose to anchor the gastric wrap to the crura, as described in the original Toupet technique (4). 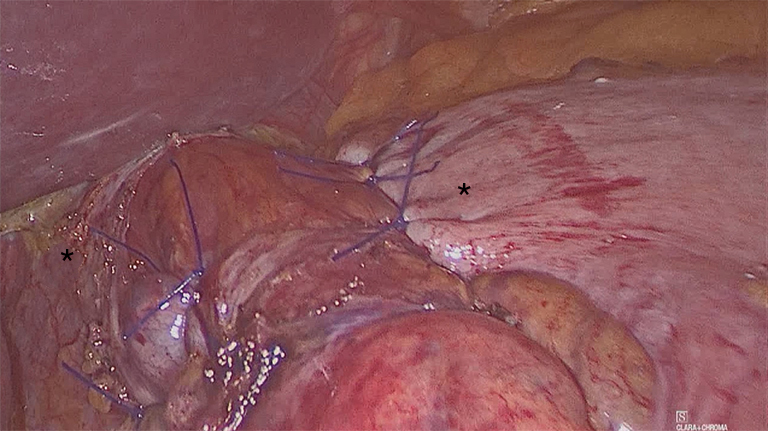 The nasogastric tube is removed at the end of the surgical procedure, except in the case of a concurrent large paraesophageal hernia repair. On the first postoperative day patients are allowed to start with clear liquids, while soft meal is introduced the day after. The discharge generally takes place on second postoperative day. Patients are instructed to a detailed diet with semi-solid foods for at least 30 days (9,10).

Several studies have evaluated the short-term outcomes of LPPF, demonstrating safety, feasibility and effectiveness of the procedure (Table 1) (11-17).

More recently, the medium-term results of series of LPPF were published. For instance, Omura et al. described the results of 375 patients undergoing laparoscopic Toupet fundoplication between 1997 and 2016. Clinical recurrence of symptoms was experienced in 15.1% of cases. Patients were therefore divided into 2 groups based on the presence of GERD recurrence. The authors concluded that longer preoperative acid reflux time, the presence of hiatal hernia, and the severity of reflux esophagitis were predictive factors of recurrence after LPPF (19).

Also, Bona et al. performed a medium-term analysis on 348 GERD patients submitted to LPPF. A bio-synthetic mesh was added for crural augmentation in 177 (51%) patients. At a mean follow-up of 37 months, 95% of patients was satisfied about the procedure, with only 1.1% patients complaining of persistent dysphagia (20).

The results of 5-year follow-up of 100 consecutive LPPF patients was published by Zehether et al. The rate of endoscopic dilatation for persistent dysphagia was 5% after 12 months from the surgical procedure. At 5 years follow-up, overall satisfaction was 96.3%. Clinical GERD recurrence occurred in 15% of patients, while occasional dysphagia was present in 2% of patients (16).

Long term results (>10 years) of LPPF are scarce. Dallemagne et al. reported the long-term follow up results of a prospective observational study comparing laparoscopic total (68 patients) vs. LPPF (32 patients). At 10-year follow-up patients were investigated with a structured symptom questionnaire, showing that 81.8% of patients submitted to LPPF were free from GERD symptoms and occasional postoperative dysphagia was experienced in 25% of patients (21).

The only study specifically assessing long-term results of Toupet fundoplication is the one performed by Franzen et al., with the open approach. They described the long-term results of 101 patients submitted to open PPF between 1982 and 1989. At 10 years after surgery, recurrence rate was 8%, and patients with severe preoperative esophagitis were at higher risk of developing recurrence. Therefore the authors concluded that in severe GERD patients Toupet fundoplication was not indicated (22).

In the last two decades, several RCTs compared LPPF and Nissen fundoplication, showing minimal differences between the two procedures (23-26). Furthermore, various meta-analysis were conducted to clarify which was the best surgical procedure for GERD (27-32). These studies agreed in the description of LPPF as the procedure that guarantees the best balance between reflux control and side-effects. For instance, in a recent network meta-analysis including 29 RCTs that compared different laparoscopic anti-reflux procedures, Andreou et al. concluded that Toupet fundoplication was equally effective as Nissen fundoplication in reflux control, morbidity and reoperations, while it was associated with lower dysphagia and gas-bloat syndrome (33).

However, the reliability and accuracy of the results of these meta-analyses are limited, due to the extreme heterogeneity between the studies regarding the methodological quality of the included studies, preoperative indications, patients baseline characteristics, and surgical technique performed (200–270° degree of partial wrap, use of a bougie, crural repair, short gastric vessel division, length of the fundoplication, inclusion of open procedures). Furthermore, the duration of follow-up, that was less than 5 years in the majority of included studies, cannot allow to draw definitive conclusions on long-term effectiveness of the procedures.

In the 1990’s, in the debate between total and partial fundoplication, the so called “tailored approach” came into vogue. Some studies showed that the postoperative functional results appeared to be better after LPPF, particularly in the subgroup of GERD patients with esophageal dismotility (34,35). Therefore, some authors proposed to select for Toupet fundoplication patients who were at higher risk of developing postoperative dysphagia after Nissen fundoplication, such as patients with impaired peristalsis (36).

However, subsequent RCTs aiming to clarify the best procedure between LPPF and Nissen fundoplication for patients with impaired peristalsis, did not confirm these results (12,14,37-39). Therefore, this approach, of tailoring degree of fundoplication based on results of preoperative esophageal motility studies, has been abandoned.

Laparoscopic anterior partial fundoplications (LAPF) were associated to fewer side effects than Nissen fundoplication. Broeders et al., analyzing the raw data set of 4 RCTs comparing Nissen and LAPF, demonstrated that at 5 years of follow-up, reflux control was similar between Nissen an 180° LAPF, but lower after 90° LAPF. The authors concluded that the results supported the use of 180° LAPF in the surgical treatment of GERD (44).

Several studies aiming to compare LAPF vs. LPPF were performed (45,46). For instance, Roks et al. performed a two-center double-blind RCT comparing laparoscopic Toupet and 180° LAPF (47 patients in each group). No differences between the two procedures in the rate of postoperative dysphagia and in reflux control were detected at 1 year follow-up (47).

Also, Daud et al. performed a multicenter RCT comparing 180° LAPF (23 patients) and LPPF (24 patients). The results were inconclusive, but a trend towards higher reflux symptoms and pH score after LAPF was present already 12 months after surgery (48).

Since the first description of posterior partial fundoplication by Andre Toupet in 1963, this procedure has gained wide acceptance. Safety and feasibility of this procedure performed with minimally invasive approach have been demonstrated by several series. The short- and medium-term results of RCTs showed similar reflux control compared to Nissen fundoplication, with lower side effects. However, long term data are lacking and the durability of Toupet procedure over time is questioned. Therefore, the debate on which should be considered the best anti-reflux procedure in the surgical management of GERD, remains open.

Provenance and Peer Review: This article was commissioned by the Guest Editor (Andrea Balla) for the series “Minimally Invasive Approach for the Treatment of Gastro-esophageal Reflux Disease” published in Laparoscopic Surgery. The article has undergone external peer review.

Conflicts of Interest: All authors have completed the ICMJE uniform disclosure form (available at http://dx.doi.org/10.21037/ls-20-101). The series “Minimally Invasive Approach for the Treatment of Gastro-esophageal Reflux Disease” was commissioned by the editorial office without any funding or sponsorship. The authors have no other conflicts of interest to declare.