Pancreaticoduodenectomy (PD) for periampulary tumors is a highly difficult surgery, and postoperative complications such as pancreatic fistula (PF) are frequent (1) (n=8,575). Under such circumstances, laparoscopic surgery for PD was reported in 1994 (2) (n=1), and robot-assisted surgery has gradually spread since the report from Giulianotti et al. in 2003 (3) (n=193). When laparoscopic or robot-assisted surgery are proposed, it is important to ensure the equivalent curability and safety of open surgery. From this point of view, it is very important to review the papers published so far on pancreaticojejunum (PJ) anastomosis in laparoscopic or robotic PD. Therefore, in this article, we will review the past literature and also show our own results of laparoscopic or robotic PD.

It is not difficult to imagine that laparoscopic PJ anastomosis would be quite difficult, but there are several papers that have explored how to safely perform laparoscopic anastomosis, and some of these are introduced in this section.

Many surgeons may employ the Blumgart procedure for PJ anastomosis in open surgery (4), and Poves et al. provide a detailed and illustrated explanation of the laparoscopic method (5) (n=13). They state that when a PJ mucosa anastomosis is conducted, two threads that have penetrated the pancreatic parenchyma in advance (usually one each in the cephalocaudal direction and not crossing the main pancreatic duct) can be led out of the body through one trocar to maintain proper alignment with the PJ mucosa anastomosis. While performing a Blumgart anastomosis, it is often difficult to ligate the pancreatic parenchyma and jejunal wall without loosening sutures. Nagakawa et al. reported a simple suture method to solve such a situation, using LAPRA-TY (6) (n=19). The frequency of clinical PF was not different when compared with the conventional Blumgart procedure (n=20), however, the time for PJ anastomosis was significantly reduced.

When the main pancreatic duct diameter is very small or cannot be identified, performing a laparoscopic pancreatic jejunal anastomosis is not straightforward. Cho et al. reported a useful method of dunking in such cases (7) (n=15). The method itself does not seem to be difficult, so we recommend that you refer to the video clip of the article, in which a thin stent was inserted into the main pancreatic duct. The preliminary results of a randomized controlled trial on the usefulness of stent in PJ anastomosis in laparoscopic pancreaticoduodenectomy (LPD) were reported recently by Cai et al (8), and concluded that there was no difference in anastomosis time or incidence of PF with (n=49) or without (n=41) stent. PJ anastomoses in LPD are easier when done with a stent, and in this randomized controlled trial, even in the no-stent group, the stent was inserted once in the handling of the needle and removed before ligation when anastomosis was performed, with the authors recommending this procedure even in the non-stent maneuver.

We consider that the difficulty of laparoscopic PJ anastomosis lies largely in the linear design of the forceps. In a paper with a video, Bibo et al. introduced a PJ anastomosis technique using an articulating needle-holder (9). At first glance, it could be mistaken for robot-assisted surgery, and the impression is that it is clearly easier to suture than a regular needle-holder. Further studies are required to assess this technique, its effectiveness, and its potential.

Some facilities may perform pancreaticogastrostomy (PG) anastomosis as a routine procedure, or as an alternative to PJ anastomosis when the main pancreatic duct is not visible. Matsuda et al. reported a laparoscopic PG anastomosis without pancreatic ductal mucosa anastomosis with a video (10) (n=5). The anterior wall was also incised, and pancreatogastric anastomosis was performed in the gastric cavity. Although there are few data on the long-term outcome of this procedure, if it can be performed easily and safely, it is an alternative method that should be mastered. Conversely, some institutions may hesitate to perform LPD, due to the difficulty to perform the PJ anastomosis, even if the resection can be performed laparoscopically. In such cases, laparoscopic resection followed by reconstruction under direct vision, in which a small laparotomy is made on the ventral side of the planned PJ anastomosis, may be indicated. We have used this method extensively in the era of laparoscopic resection, with satisfactory results in terms of postoperative course (11) (n=20). Whether this procedure should be called laparoscopic-assisted surgery or hybrid surgery is still unclear. If there is a strong commitment to perform the reconstruction under the direct vision, this method may be useful even in the current era of laparoscopic surgery. 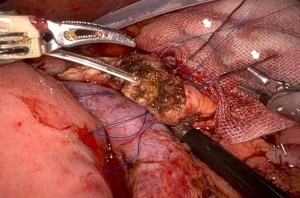 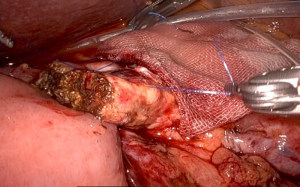 Figure 2 After ligation and fixation between jejunum and pancreas parenchyma. It can be clearly seen that the posterior wall of the jejunum is properly anchored to the dorsal pancreatic parenchyma. 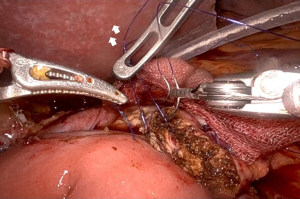 Figure 3 The first suture is grasped by arm 4 (Tip-Up Fenestrated Grasper) and pulled and deployed in the direction of the white arrows to align the anastomotic hole between the MPD and the jejunum, facilitating subsequent anastomosis. MPD, main pancreatic duct. 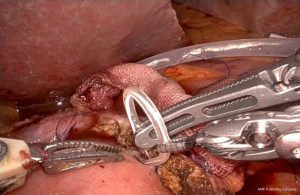 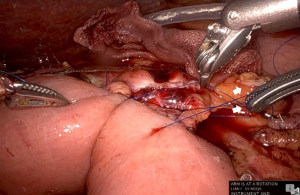 Figure 5 View of anterior wall fixation of the pancreatic parenchyma and jejunum; by grasping and pulling (in the direction of the white arrows) the thread in the caudal side with arm #4, the pancreatic parenchyma and jejunum are pulled together, facilitating appropriate ligation of the thread on the cranial side. If this traction is not performed, the ligature thread is subjected to repulsive force and tends to loosen.

Comparison of the results between laparoscopic and robotic PD

We have presented methods for laparoscopic and robot-assisted PJ anastomosis. Several papers have already compared the results of these two approaches, which will be presented in this section. In a retrospective study using NSQIP data (280 laparoscopic cases and 211 robotic cases), Zimmerman et al. reported the following LPD vs. RPD data: operative time [421 vs. 404 minutes, not significant (ns.)], conversion rate to open (28% vs. 11.4%, P<0.001), PF incidence (19.2% vs. 21.9%, ns.), overall morbidity (55% vs. 62.1%, ns.), mortality rate (2.5% vs. 2.8%, ns.); similar results for both techniques, except for conversion rate (15). Regarding conversion to laparotomy, Lof et al. analyzed the results of a European multicenter retrospective study [overall: 457 laparoscopic and 250 robotic; conversion to laparotomy: 52 laparoscopic (11.3%) and 13 robotic (5.2%)] and found that laparoscopic surgery was associated with a higher rate of conversion to open surgery. The authors also compared the results of patients who underwent laparotomy: operative time (conversion from LPD vs. RPD: 370 vs. 480 min, P=0.004), PF incidence (25% vs. 15%, ns.), and mortality rate (6% vs. 23%, ns.). The high mortality rate in converted RPDs is alarming, but they cited only one bleeding event as the reason for conversion from RPDs, with tumor vascular invasion being the main reason for the rest (16). In a paper published this year from Korea, the authors compared LPD and RPD cases with a propensity score match, from 280 LPD and 80 RPD cases to 74 LPD and 74 RPD cases, and found that the operation time (LPD vs. RPD: 452 vs. 411 min, P=0.001), the conversion rate (8.1% vs. 0%, P<0.001), PF rate (13.5 vs. 12.2%, ns.), complication beyond Clavien-Dindo classification IIIa (14.9% vs. 21.6%, ns.), length of hospital stay (14.6 vs. 11.9 days, P=0.027), and concluded that RPD has advantages over LPD in several respects (17). In addition to the articles above, our own experience (91 cases of LPD and 28 cases of RPD) were shown in Table 1. LPDs were performed by two surgeons including first author and all RPDs were performed by a single surgeon (TA) in our department. The indication for LPD or RPD for periampullary tumor is the same at our institution, and excluding the borderline resectable pancreatic cancer, those requiring vascular reconstruction and bile duct cancer located with hilar side from the cystic duct in each procedure. The results at our institution show that, although the operative time is still long, blood loss, PF, and complication rates are acceptable for both LPD and RPD, and the RPD clearly outperforms the LPD especially in the aspect of surgical safety. Our results for RPD may further improve with more experience because the technical skills of the surgeons should improve. For this reason, we believe that RPD is preferable to LPD.

Comparison of operative outcome between LPD and RPD in our institute

Provenance and Peer Review: This article was commissioned by the Guest Editor (Ippei Matsumoto) for the series “Laparoscopic Pancreatic Surgery” published in Laparoscopic Surgery. The article has undergone external peer review.

Conflicts of Interest: All authors have completed the ICMJE uniform disclosure form (available at https://ls.amegroups.com/article/view/10.21037/ls-22-57/coif). The series “Laparoscopic Pancreatic Surgery” was commissioned by the editorial office without any funding or sponsorship. SE serves as an unpaid editorial board member of Laparoscopic Surgery from September 2022 to August 2024. The authors have no other conflicts of interest to declare.