Pancreatic ductal adenocarcinoma (PDAC) is an aggressive disease with a poor prognosis. Although surgical resection is the only curative treatment, the 5-year survival rate after pancreatectomy for PDAC is approximately 20% (1). The major recurrence pattern after pancreatectomy is distant metastasis. However, local recurrence has also been reported to be high (2). Obtaining negative margins in surgical resection is key to reducing local recurrences.

Radical antegrade modular pancreatosplenectomy (RAMPS) is one of the operative methods for distal pancreatectomy, which was first reported in 2003 (3). It has been reported to be useful for obtaining a negative retro-pancreatic margin (4,5), possibly reducing local recurrence (6). With advances in minimally invasive surgery, laparoscopic RAMPS (L-RAMPS) has been performed for PDAC in the body and tail of the pancreas. Several studies have shown comparable short- and long-term outcomes between open RAMPS and L-RAMPS (7-9). The advantages of L-RAMPS include the magnified view of laparoscopy possibly with three-dimensional imaging system, which enables an understanding of the precise plane for dissection during surgery. However, at the same time, L-RAMPS for PDAC is technically demanding, and a lack of experience can lead to serious intraoperative and postoperative complications.

The indications for L-RAMPS can vary depending on the skill and experience of the surgeon. In our institution, we consider L-RAMPS for PDAC in the body and tail of the pancreas with neither direct invasion to the adjacent organs (except for the left adrenal gland) nor abutment to the major vessels, such as the celiac axis (CeA), superior mesenteric artery (SMA), and portal or superior mesenteric vein. Although invasion of the splenic vessels is not a contraindication, a distance of less than 5 mm between the tumor and the origin of the splenic artery (SpA) should be a contraindication for L-RAMPS as a safe ligation and division of the SpA is difficult. The distance between the tumor and the gastroduodenal artery is critical if a tumor extends into the neck of the pancreas. Laparoscopic dissection along the gastroduodenal artery is technically difficult and often requires the division of the superior pancreaticoduodenal artery. Injuries to the adventitia of the gastroduodenal artery can cause arterial bleeding after surgery.

Regarding anatomical factors, the location and tortuosity of the SpA are important in deciding how to approach it. The location of the origin of the dorsal pancreatic artery should be carefully checked in each case (10). It can easily be injured during dissection around the common hepatic artery (CHA) and SpA. If the dorsal pancreatic artery is abnormally dilated, it possibly supplies collateral flow into the liver from the SMA due to stenosis of the CeA (11). In such cases, perfusion of the hepatic artery should be carefully checked after division of the dorsal pancreatic artery. It should be checked preoperatively whether the arterial arcade in the head of the pancreas also supplies hepatic arterial flow. The presence of a portal annular pancreas is also important since it requires additional pancreatic transection behind the portal vein (12). The junction of the left gastric and inferior mesenteric veins should be checked to decide whether to preserve them or not. The anatomy of the left renal artery (LRA) should be checked as there may be an accessory renal artery or branching variations (13). The checklist for preoperative evaluation is shown in Table 1. All procedures performed in this study were in accordance with the ethical standards of the institutional and/or national research committee(s) and with the Helsinki Declaration (as revised in 2013). Written informed consent was obtained from the patient for publication of this article and accompanying images. A copy of the written consent is available for review by the editorial office of this journal.

The patient was placed in the reverse Trendelenburg position, with the legs spread. Five trocars were placed in the upper abdomen. In most procedures, the operator is on the right side and the assistant is on the left side of the patient (Figure 1A). However, the positions were switched during some procedures (Figure 1B-1D).

Retraction of the liver and stomach

For adequate lymphadenectomy, liver retraction is necessary to obtain a wide operative field around the superior margin of the pancreas. Several instruments, including the Nathanson liver retractor, have been reported to be useful for liver retraction (14-16). We used a Silicon DiskTM (Hakko Co., Ltd., Nagano, Japan) to retract the liver (Figure 2A). 2-0 Prolene® (Ethicon, Somerville, NJ, USA) was used to anchor it to the diaphragm around the esophageal hiatus and the abdominal wall below the xiphoid process. This method is less invasive than using a Nathanson liver retractor because only 2-0 Prolene® passes through the abdominal wall. In addition to retraction of the liver, retraction of the stomach is also key to a wide exposure of the pancreas (17-20). We used two 6-cm Penrose drains to retract the stomach. After incisions of the lesser and greater omentum, the left gastroepiploic and short gastric vessels were transected. The two Penrose drains passed behind the stomach and were pulled into the antrum and body of the stomach (Figure 2B). This method can provide adequate tension to the left gastric vessels, making lymphadenectomy easy to perform.

Figure 2 Intraoperative images of retracting the liver and stomach. (A) A Silicon DiskTM (Hakko Co., Ltd., Nagano, Japan) is used to retract the liver. A 2-0 Prolene® (Ethicon, Somerville, NJ, USA) is used to anchor it to the diaphragm around the esophageal hiatus and the abdominal wall below the xiphoid process. (B) Two 6-cm Penrose drains are used to retract the stomach and are attached to the abdominal wall (arrows). This procedure puts adequate tension on the left gastric vessels (arrowheads).

Ligation of the SpA

It is important to first identify and ligate the SpA to reduce bleeding around the spleen and prevent pancreato-splenic congestion after ligation of the splenic vein. Although some reports have shown the efficacy of the artery-first approach, in which the SpA is ligated and divided before pancreatic transection (21-23), we usually only ligate and do not divide the SpA first, since it is often difficult to expose the root of the SpA widely before pancreatic transection. 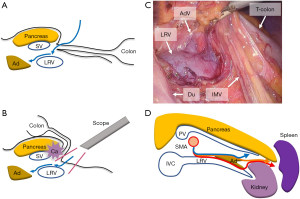 Figure 4 Schematic and intraoperative images of the posterior dissection. (A) A sagittal view of the approach from the cranial side of the transverse mesocolon. The transverse mesocolon was retracted caudally and incised along the inferior margin of the pancreatic body. After the dissection reached the anterior surface of the LRV, the plane was widely dissected (blue arrows). (B) A sagittal view of the approach from the caudal side of the transverse mesocolon (ligament of the Treitz approach) (blue arrows). When the tumor is located near the caudal aspect of the pancreas, this approach is useful for securing a negative retro-pancreatic margin. The laparoscopic caudal view is suitable for this approach. (C) Intraoperative image of the ligament using the Treitz approach. (D) An axial view of the posterior dissection margins. A red circle indicates the SMA. The SMA was a landmark on the right margin. For tumors in the body of the pancreas, the left adrenal gland is a useful landmark for determining the craniolateral margin of dissection (blue arrow). For a tumor close to the left kidney, dissection was extended to the left along the anterior surface of the kidney (orange arrow). For tumors suspected of invasion of the adrenal gland, posterior dissection should proceed behind the adrenal gland (posterior L-RAMPS; red arrow). SV, splenic vein; Ad, adrenal gland; LRV, left renal vein; Ca, cancer; AdV, adrenal vein; T-colon, transverse colon; Du, duodenum; IMV, inferior mesenteric vein; PV, portal vein; SMA, superior mesenteric artery; IVC, inferior vena cava.

Transection of the pancreas and splenic vessels

Before transecting the pancreas at the neck, we routinely encircle the CHA. During this procedure, preservation of the nerve plexus of the CHA is important for preventing arterial injury (Figure 5A). Invasion of the nerve plexus of the CHA is very rare when the tumor does not abut it in preoperative computed tomography (CT) images (31). Next, the plane between the pancreatic neck and the portal or superior mesenteric vein should be widely dissected (Figure 5B). A polyester surgical loop was passed behind the pancreatic neck and used for retraction during pancreatic transection. There are some tips on stapler pancreatic transection to prevent postoperative pancreatic fistula: (I) precompression of the pancreas (32-35); (II) adequate selection of the cartridge (36-38); (III) slow firing technique (39). We used two parallel intestinal clamps for five minutes of precompression of the pancreas (Figure 5C). A cartridge with a length of 45 mm and a height of 1.5–2.25 mm is adequate in most cases (Figure 5D), but it should be changed according to the width, thickness, and hardness of the pancreas. A firing speed of 30 s was applied every 1 cm.

After transection of the pancreas, the root of the splenic vein was widely exposed (Figure 5E). They were dissected and divided using double ligation. Retraction of the pancreatic body to the left exposed the root of the SpA (Figure 5F). It is important to dissect the nerve plexus around the SpA at the location of the ligation to prevent slipping of the ligatures. It also creates an appropriate distance for the ligation and division of the SpA. Double ligation is usually performed for the SpA with 3-0 Vicryl® (Ethicon, Somerville, NJ, USA) and a Hem-o-lok® clip (Weck Closure Systems, Research Triangle Park, NC, USA).

Dissection of the retroperitoneal tissue and retrieval of the specimen

After en bloc lymphadenectomy, dissection of the retroperitoneal tissue was performed along the body and tail of the pancreas and spleen. A retrieval bag was placed in the left subphrenic space. The specimen was bagged in a “spleen-first” fashion and retrieved via the umbilicus with a minimal port site incision. The cut margin of the pancreas was routinely assessed using frozen section analysis. A peritoneal drain was routinely placed on the stump of the pancreas.

Several important anatomical structures can be recognized preoperatively for L-RAMPS. Surgeons should be familiar with the multiple approaches to landmark vessels during L-RAMPS. Given the variations in anatomy and location of the tumor, selecting the proper approach for each case leads to safety and oncological benefits.

Provenance and Peer Review: This article was commissioned by the Guest Editor (Ippei Matsumoto) for the series “Laparoscopic Pancreatic Surgery” published in Laparoscopic Surgery. The article has undergone external peer review.

Conflicts of Interest: All authors have completed the ICMJE uniform disclosure form (available at https://ls.amegroups.com/article/view/10.21037/ls-22-46/coif). The series “Laparoscopic Pancreatic Surgery” was commissioned by the editorial office without any funding or sponsorship. The authors have no conflicts of interest to declare.

Ethical Statement: The authors are accountable for all aspects of the work in ensuring that questions related to the accuracy or integrity of any part of the work are appropriately investigated and resolved. All procedures performed in this study were in accordance with the ethical standards of the institutional and/or national research committee(s) and with the Helsinki Declaration (as revised in 2013). Written informed consent was obtained from the patient for publication of this article and accompanying images. A copy of the written consent is available for review by the editorial office of this journal.